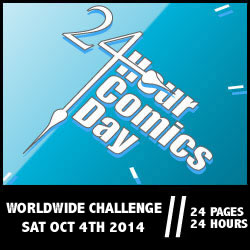 Like the impetuous, foolish glutton for punishment I can so often be, I have made the (probably unwise) decision to continue my string of personal challenges by participating in 24 Hour Comic Day this year. The goal is as simple as it is insane: create a 24 page comic in a 24 hour period. Knowing that I most certainly won’t have the full 24 hour period in which to work on it, I’m unable to attend any of the official hosted sites and will instead work in the safety of my secluded nerdcave. So, over the course of the next 24 hours, I will be updating this post with pictures of my progress. It’s highly unlikely I’ll complete it in the allotted time, but my back-up goal is to at least complete the comic by the end of Sunday night. Alright, let’s get to it!

Page 1 is done (basically). I should have made the decision to do this earlier, so that I could have gotten the right materials, especially paper. Instead of larger size paper, I opted for smaller and it’s not working as well as I had hoped. 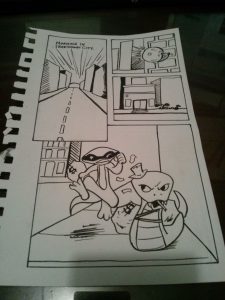 12 hours in (although only about 4 hours of actual work time), I have added 5 1/3 pages that fall somewhere on the spectrum between thumbnails and rough pencils. It’s definitely not anywhere near the quality I had hoped, but it’s something… 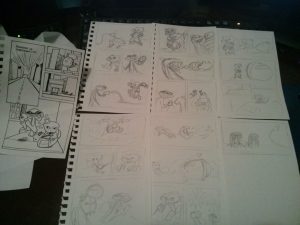 Well, shockingly, the attempt failed miserably. Other than getting the second page inked (mostly) and finishing out the 7th page, I didn’t make any more progress than the picture posted above. Due to my poor choice in paper for this and my lack of preparedness, I don’t feel this particular project (“EpicSquirrel”) is worth completing, but I can assure you this won’t be the last of these characters that you see.

All in all, it was still a fun try and I’d like to take another shot at it next year, only with more lead time to rest up and acquire the right materials.